Letter to His Holiness, Rome1946

The following letter was written by Gjon Markagjoni to His Holiness Pope Pius XII as a plea for assistance to him and other Albanian leaders who had emigrated to Italy and were being sought by the communist regime of Albania to be extradicted under death warrants.

Below is a copy of the original letter followed by the English translation. 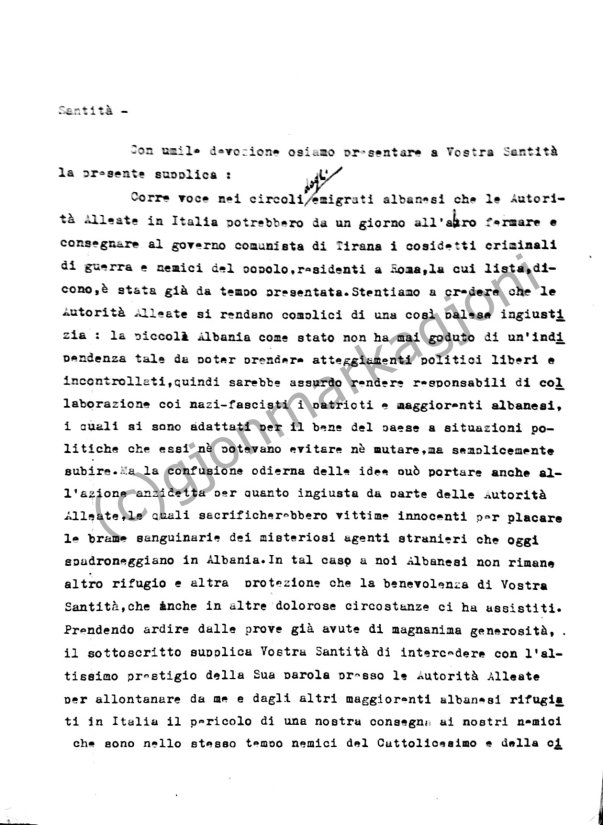 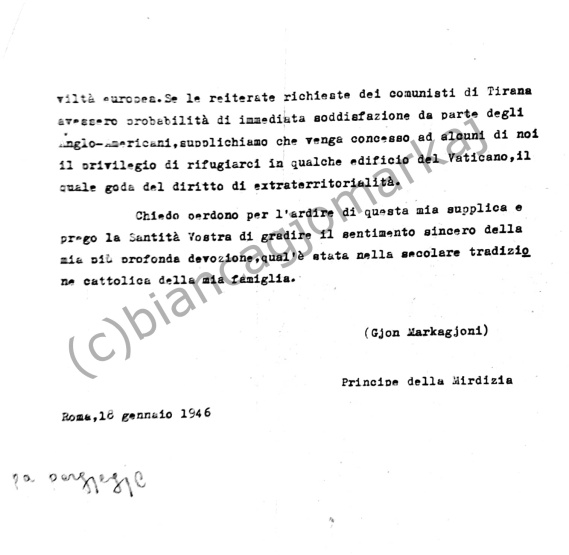 with humble devotion we dare to present our plea to your Your Holiness:

There is a rumor in the circles of Albanian emigrants that the Allied authorities in Italy could stop and turn-over, from one day to the next, to the communist government of Tirana, the so called war criminals and enemies of the people who are residing in Rome, whose list, they say, has already been presented. We find it hard to believe that the Allied authorities would make themselves accomplices of such open injustices: the small country of Albania, as a state, has never enjoyed the total independence allowing it to assume free and uncontrolled political attitudes, so it would be absurd to make Albanian patriots and leaders, who to adapt for the good of the country to political situations which they could neither avoid nor change, but simply endure, responsible of collaboration with the Nazis-Fascists. But today’s confusion of these ideas may also lead to the aforementioned action, however unjust, on the part of the Allied authorities, which would sacrifice innocent victims to appease the bloodthirsty desires of the mysterious foreign agents who today dominate in Albania. In this case, we Albanians have no other refuge or protection other than the benevolence of Your Holiness, who has also assisted us in other painful circumstances. Drawing on the courage from the evidence already shown of magnanimous generosity, the undersigned besieges Your Holiness to intercede with the highest prestige of your word to the Allied authorities to distance from me and from the other major Albanian refugees in Italy the danger of our surrender to our enemies, which are at the same time enemies of Catholicism and European civilization. If the repeated requests of the communists of Tirana were likely to be immediately satisfied by the Anglo-Americans, we implore that the privilege of taking refuge in some of the Vatican buildings, which enjoy the right to sanctuary, would be afforded to some of us.

I ask for forgiveness for the audacity of my plea and I pray for Your Holiness to accept the sincere feeling of my deepest devotion, which has been in the secular Catholic tradition of my family.