After Gjon Markagjoni and his son Ndue reached Rome they began contemplating on a way to unite Albanian nationalists and anti-communist forces who were forced to escape their motherland. Bloku Kombetar Independent was the fruit of these endeavors and was created in 1946.

The party was joined by many notable figures of Albania all of whom wanted to be part of the fight for a free Albania and fulfill their lifelong dream; to see their families once again in a free and democratic Albania! 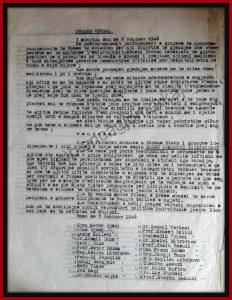 The document above is the original Verbal Process detailing the scope of the party and listing the Charter members, it is dated 6 November, 1946:

The history of the Bloku is  a long and an important one. After 9 years of existence it joined the restructured National Committee for a Free Albania (NCFA)  in 1955. This Committee was created as an overt operation to assist in the US and British led covert operations which would be launched between 1948-1953 in an attempt to free Albania and topple the communist regime.

In order to better show the functionality of the Committees, insight into its members and their important presence in the fight for a free Albania I am posting various personal documents and copies of documents available through the CIA (Central Intelligence Agency) site. These CIA documents have all been declassified and released under the Freedom of Information Act.

CIA-RDP82-00457R003200140009-9-BKI Constitution 1946– “The BKI includes groups and individuals who have as their chief aim the uniting of all nationalist Albanians inspired with democratic principles.”

These statements among others would hold true within  the party until the collapse of Communism in 1991:

“The BKI has as the base of its political program two fundamental aims: to use all means to free Albania from the Soviet yoke and to seek every possibility of enabling the Albanian people to obtain the freedom necessary to freely to decide its future.”

“The BKI comprises the majority of those Albanian political emigres who, through family tradition or religious or cultural conviction, are intransigent enemies of Communist theory and practice. Whatever opinion opponents of BKI may express in good faith or in bad, they cannot deny that the BKI is the most definitely anti-Communist of the political groups in which the Albanian emigres are organized…..”

“The tenacious and heroic resistance against Soviet Communism in Albania from 1944 to date has been almost exclusively the work of the sons, brothers, relatives and followers of the leaders of the BKI.”

“Gjon Marka Gjoni, the traditional leader of the Albanian Catholics, member of the very old Gjon Markaj family, Princes of Mirdite and custodians of the Kanun of Lek Dukagjini (law of the mountains of Albania); representatives of the Gjon Markaj family were the godsons of Napoleon I and Napoleon III, who sent high officials and gifts to their baptism. The influence of Prince Markagjoni on the people of Mirdite is well known and, it may be said, has greatly increased since the loss of his two sons, Marco and Alexander (Mark and Sander), who fell after heroic resistance against the Red forces while at the head of their followers, the first in June 1947 (this date should have been 1946) and the second in 1949 (should be 1947), and who are today a subject of glorification in the popular songs of the mountains.”

The CIA reports are also very important to the historical legacy of my family. It shows that even the government of the United States of America recognized the valuable contributions made by my family, not only in the fight against Communism but also in their indisputable place in Albanian history. It validates the family’s honor, commitment and love for Albania on many, many levels, a fact which the communist regime, for over 50 years, tried to destroy through their propaganda and teachings. A fact, which to this day, is still disputed among scholars and so called intellectuals in Albania.

CIA Daily Digest 1951-BKI Mention – “The “Front” is also reported to be seeking contact with the Bloku Kombetar Independent (BKI)….”

CIA-RDP80-00810A003600930003-7-Refugees in Yugoslavia-Nikoll 1954 – “Mark Pashko, currently leader of the Montenegro group of refugees is one of BKI’s stronger supporters. He holds that his country’s liberation can come only from the West, and that its best representatives there are the leaders of the BKI.”