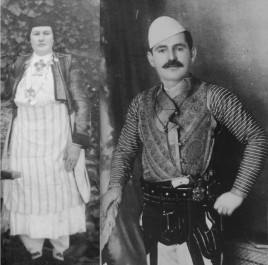 Kapidan Gjon Markagjoni was born in Orosh, Mirdita, Albania, on 28 August 1888, the only son of Kapidan Marku Gjoni. In 1904 he married Mrika Pervizit (1883-1969) niece of the Kurbin the Gjok, Bajraktari Peter Pervizi. Their children were: Mark, Ndue, Llesh, Dede, Nikoll, Marta, Dila and Bardha. After the death of his father, Kapidan Marku Gjoni in 1925, Kapidan Gjon inherited the responsibility handed down to him as leader of Mirdita. He was often called upon to intervene in feuds raging within other Mirdita tribes and to preside over the arguments with fairness and clarity, but most of all to pass on judgments following the guidelines of the Kanun.

Although young at the age of 37 he was already distinguished as a leader of the mission. He was responsible for reconciling many feuds during 1926-1928, leading Mirdita to become one of the more peaceful regions of the North. Because of his leadership skills in mediating reconciliations his fame became widely known and many activists and foreign leaders requested to meet him. In 1926, surrounded by the leaders, he oversaw his first Reconciliation. He united Mirdita, bayrak by bayrak, village by village, by resolving disputes and reconciling blood feuds. In 1926 he reconciled 360 blood feuds. In 1928 he oversaw his second Reconciliation and reconciled 260 blood feuds this time as well.  Thus, Mirdita became the quietest area in North. With this action, the prestige of Kapidan Gjon Marka Gjoni became so great that Albanians and foreigners alike wanted to meet him.

In a conversation with Zog, then president of Albania, Kapidan Gjon presented his economic views on the poor state of Mirdita. He was told that because of his ability to keep peace and dealing with problems in Mirdita they would be exempt from any state tax. When Ahmet Zog was proclaimed king in 1928, all the northern chiefs of the mountains, among them Kapidan Gjon, met with the King. Kapidan Gjon was the first chief to be allowed a meeting with the King before any of the other leaders. When all the officers were appointed Majors, Gjon Marka Gjoni was appointed Lieutenant-Colonel; the highest rank.  Zog appreciated the friendship that the House of Gjomarku had with the house of Zog that is why he gave him such an honor.

In 1930 Kapidan Gjon went to Rome where he was received with high honors from the Italian Government and the Pope.

In 1944, Kapidan Gjon, along with his sons, Mark, Ndue and Llesh, recognizing that the communists did not acknowledge national dialogue, organized an anti-communist resistance. Thus, Kapidan Mark Gjon Markagjoni, with full support of his father Kapidan Gjon, founded the “National Independent Group” in Shkodra, which he developed through his own political activity.

After an invincible resistance by the three sons: Mark, Ndue and Llesh, supported by Kapidan Gjon, and seeing that the communist forces had strengthened, Kapidan Mark, without telling anyone, had made a decision. He, together with his third brother, Kapidan Llesh, were going to lead the fight for ethnic Albania, while his father, Kapidan Gjon, and second brother Kapidan Ndue, would go west and continue the fight against communism, thus not completely extinguishing the Markagjoni (Gjomarkaj) legacy. Kapidan Mark told his father and brothers of his decision and after many attempts managed to persuade Kapidan Gjon to leave his beloved Mirdita under the escort of his second eldest son Kapidan Ndue.

In Kastrat on November 27, 1944, they all shook each other’s hand and the brothers and father were separated forever. Kapidan Gjon, accompanied by his son Kapidan Ndue, left Mark and Llesh, who remained in Albania, fighting against communism, until they fell heroically; Mark on 14 June 1946 and Llesh on 9 August, 1947.

“Those who lived near Kapidan and were fortunate to meet and serve with him, will always remember his generosity and sharpness. He was lovingly surrounded by us and we will always be thankful that he participated in our discussions without ever missing a word. He always offered sincere and wise advice and always managed to mesmerize us with his insight. He was a man who understood everything with a magnificently sharp memory. We will always remember his noble face full of kindness. We will always remember him as noble and sensitive. Even after years of suffering, his thoughts were always clear and lucid. Everyone around him was always impressed with his stories of the old world and we were all amazed at the clarity of his memory.”

Kapidan Gjon lived in Rome with his son Kapidan Ndue, wife Maria Teresa and three granddaughters: Maria Cristina, Bianca Maria and Alessandra. He became seriously ill in 1960. The prognosis was not good. He was given a couple of months to live, however after a brief stay in the hospital he returned home. His life continued in relative good health and spirits until 1964 when the disease returned. For two years he remained hospitalized. Although losing his voice to the disease he spoke with light in his eyes, albeit shaded in sadness, sadness for the suffering of his family whom he would never see again. On April 28, 1966, his hand tightly held by his son Ndue, who cared for him all through the illness, he quietly passed away. He was buried in Rome on April 30, 1966. His funeral was attended by a multitude of dignitaries, scholars and friends. Telegrams and condolences were sent by King Leka of Albania, Cardinal Antoniutti and Francesco Jacomoni among others.

In the words of Professor Zef Valentine, who said:

“Kapidani Gjon Markagjoni of Mirdita was a pillar of the national flag, the flag, which for five centuries, has maintained a Heroic Mirdita.”